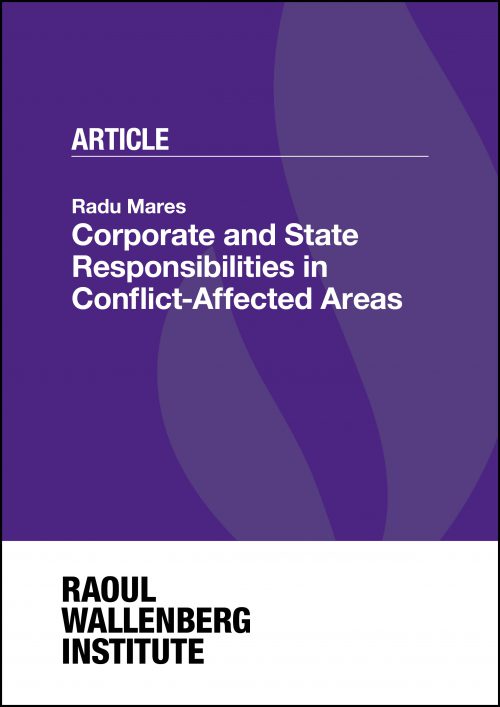 Some of the emblematic cases of corporate-related infringements of human rights have appeared in unstable and violence-ridden zones, including armed conflict and other contexts with lower levels of conflict, internal disturbances, widespread violence and latent tensions. Businesses have been involved in different ways, as direct perpetrators, accomplices or mere trading partners. This article tracks the issue of conflict-affected areas as elaborated in the United Nations (UN) Guiding Principles on Business and Human Rights during the Special Representative’s mandate (2005–2011) and the post-mandate period of 2011–2014, especially by looking at the UN Working Group on business and human rights and the emerging National Action Plans. Conflict was a theme of high priority during John Ruggie’s UN mandate but lost visibility in the post- 2011 period. What could explain this change? This article analyses in depth the relevant provisions in the UN Guiding Principles, particularly Principle 7, and how stakeholders have responded to the Special Representative’s policy recommendations. The results of this analysis indicate that, contrary to appearances, Principle 7 is not merely an operational, context-specific principle limited to conflict-affected zones where the host state is incapacitated by conflict; rather Principle 7 should be seen as a foundational principle about gross abuses, about the responsibilities of home states to act preventively and reactively when ‘their’ companies are involved in gross abuses in conflict-affected areas and beyond.

This website uses cookies so that we can provide you with the best user experience possible. Cookie information is stored in your browser and performs functions such as recognising you when you return to our website and helping our team to understand which sections of the website you find most interesting and useful. Read our full cookie policy here.

You can adjust all of your cookie settings by navigating the tabs on the left hand side.

Strictly Necessary Cookie should be enabled at all times so that we can save your preferences for cookie settings.

If you disable this cookie, we will not be able to save your preferences. This means that every time you visit this website you will need to enable or disable cookies again.