The Swedish Institute Academy for Young Professionals (SAYP) helps develop a new generation of leaders through networking and mutual learning. Young policymakers, public servants and civil society actors develop their capacities to meet the requirements of a modern governance.

Mirsad Vitia is a member of the Prishtina Municipality Council. He has studied a Master of European Studies – Governance and Regulation at the university of Bonn in Germany previously. In addition to his political mandate, Mirsad has worked as an executive assistant of the deputy minister for communities and return, among other things.

Mirsad and Andrea met during SAYP in Lund. Being part of the 2022 SAYP, which “gave [them] a change to apply for a project assignment as a follow-up activity of this important academy.” Jointly, they decided to apply for a project grant to make a contribution in raising awareness of a topic and to strengthen ties and establish further collaboration as Alumni of the SAYP.

Segregation of schoolchildren in Albania and Kosovo

Andrea and Mirsad chose to highlight the topic of segregation of schoolchildren in their respective countries. The aim of the project was to raise awareness of the phenomenon of segregation of because of ethnic origin. Roma, Egyptian and Askhali minority (the last-mentioned community exists only in Kosovo) are usually discriminated against due to ethnicity. The discrimination is shown through the access to school for the pupils. Pupils are segregated and put into specific schools after their ethnicity.

As a negative consequence, the pupils of different ethnicity backgrounds are enrolled in specific schools and are not offered the opportunity to integrate into social life and activities with children of the ethnic majority. A major consequence is the incapacity of the institutions in ensuring adequate mechanisms of every child treated equally.

The project was aimed to raise awareness of these issues with a series of lectures and a workshop that can help change the perception of the participants on this topic.

Participants were selected based on Andrea’s and Mirsad’s professional backgrounds and taking into the consideration the impact in their respective societies.

As a result, two events were held in both countries with representatives of local municipalities in Pristina and law students at the University of New York Tirana. In that way, Andrea and Mirsad could raise awareness in both practitioners and future practitioners, contributing to lasting change. 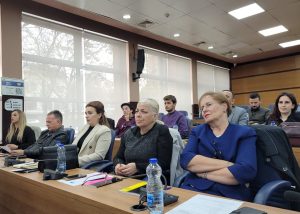 Academic seminar at the townhall in Pristina

The first event organised by Andrea and Mirsda was a workshop with public officials and other actors working at the local level in educational institutions. The workshop covered two topics: “Handling segregation in primary schools in Albania and Kosovo: An international Human Rights Perspective” and “Ethnic Discrimination in Schools: An Educational and Social Phenomenon.”.

Edmond Syla was one of the participants at the workshop. He is a youth activist and has been engaging with several NGOs on local and regional level. Edmond saw Mirsad and Andrea’s project as a chance to “learn and discuss more about these issues, to change and remove stigma and prejudice.”

He believes that there is a need for equipping young people to raise awareness of on how to protect human rights and avoid violations.

One of the lessons learned for Edmond was the existence of anti-Gypsyism in the media and how it contributes to inequality for ethnical minorities in Kosovo. Media’s use of discriminatory language affects policymakers. Edmond understood that media plays a large role in the discourse about inequality and human rights.

Another participant was Gezim ­­­­­­Zeqiri – a human rights activist with experience in activism for ethnic minorities. Gezim said that:

In the session facilitated by Mr. Hektor Ruci, I had the opportunity to absorb a lot of information about the ethnic communities in Albania, and the challenges they faced historically and nowadays as well. To be honest, most of this information was new to me, so I believe it has broadened my perspective on Albania’s treatment of communities. 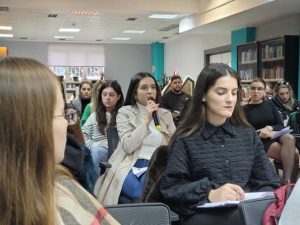 On 25 November in Tirana, Andrea and Mirsad helped organise an open lecture on human rights issues and non-discriminatory framework with the participation of twenty law students. Among the participants were students from UNYT Faculty of Law and Social Sciences as well as from the faculty of Law of the University of Tirana.

One of the participants was Sefeda Lazaj, a law student at the university of Tirana. When she registered to participate, she hadn’t “been able to do proper, in-depth research on a specific topic such as segregation and discrimination.” Sefeda believes that “Segregation is a huge problem in Albania, and I wanted to learn more about the challenges that we face in tackling it through the point of view of each one of the experts and lecturers who was present.”

–  Can you give me an example of what you learned during the project?

During the project I learned a lot, especially about the administrative guarantors, the role of society and schools in creating a safe environment. Something that stuck up with me is the case that went to the European Court of Human Rights called “X and Others v. Albania”, which we also got the chance to discuss.

Andrea and Mirsad’s idea was to establish a sensibilization campaign and to teach target groups about the topic of desegregation of pupils.  With funding from the Swedish Institute, implementation by LUCE, and with contribution of RWI and LUSEM, they were able to raise awareness of segregation of school children in Albania and Kosovo.

Posted in: International Programmes,
SAYP »
Share with your friends